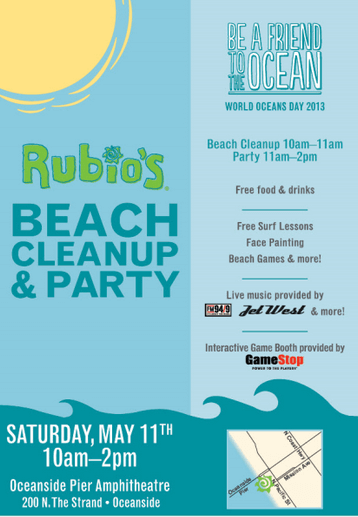 Counting the sea as a source of inspiration since its founding 30 years ago, Rubio’s is dedicated to doing its part to “Be a Friend to the Ocean.” In honor of World Oceans Day (June 8), Rubio’s will host a beach cleanup and party in Oceanside, CA, for the San Diego community to come together and celebrate the ocean.

With more than 1,000 community members expected to join in the May 11 festivities at the Junior Seau Oceanside Pier Amphitheatre, the celebration will kick off at 10am and include free lunch for all attendees, cooking demonstrations, complimentary surf lessons and face paintings, an extreme bocce ball tournament, beach games and art exhibitions comprised of trash from local-area artists. San Diego’s 94.9 FM will be on hand, as will two Southern California bands, The Little Ones and Jet West, to perform live.

This event will also celebrate the launch of Rubio’s “Be a Friend to the Ocean” campaign for 2013. This initiative will find the iconic San Diego brand hosting beach cleanups, online contests, events and more, all aimed at engaging and inspiring community members to be a friend of the ocean year-round. Rubio’s other ocean-friendly plans include: in-store donations, children’s ambassador program, ocean-centric online games, trash art installations and a reusable tote bag giveaway on June 8.

Fans, supporters, friends and community members are invited to come out for a day of beach-side fun and festivities. The party will include free lunch for all attendees, cooking demonstrations, complimentary surf lessons and face painting, an extreme bocce ball tournament, an interactive game booth from GameStop®, beach games and art exhibitions comprised of trash from local-area artists.