Providing customer service via Twitter is commonplace for the hospitality industry.

Who can forget when entrepreneur Peter Shankman jokingly tweeted Morton’s Steakhouse requesting they deliver a steak to him at the airport?

Upon landing in Newark, Peter was greeted by a Morton’s server with a 24 oz. Porterhouse steak, shrimp, potatoes, and bread.

Pulling something like this off is no small feat – Mortons’ social media manager had to get approval, place the order, and ensure it was prepared in a timely manner then made it to Peter at the airport.

Peter covered this on his website and it immediately went viral. Calling it “the greatest customer service story ever told,” Peter outlined the story and why it was impressive.

Not only was this a win for Morton’s Steakhouse, but it also showcased the sheer power of Twitter and the effect it can have on customers when executed correctly.

According to research conducted by Social Bakers last year, more than 80% of customer service requests on social are happening on Twitter, not to mention there has been a greater than 2.5x increase in the number of tweets to brands and their customer service usernames in the past two years (or had been at the time of the study).

In an effort to emphasize its position as a critical tool in delivering top-notch customer service, Twitter recently introduced new display options and tools.

Companies can set hours they’re keen to monitoring their accounts (and thus, responding to inquiries) which will help set expectations in terms of when a reply may be received. A profile badge will indicate when they’re available to respond to messages.

Brands will also be able to explicitly note that their profile provides support. The accounts with this option will boast a new, large ‘Message’ prompt displayed on their profile.

This larger Direct Messages button — which takes over the full space where the “Tweet to” and “Message” buttons used to live side-by-side — encourages users to start a private conversation with the business instead of publicly tweeting at them.

Hotels, restaurants, and airlines should most certainly peruse their settings and adjust their support information accordingly.

If you take a look at United’s Twitter account, they already have the feature enabled noting that they’re responsive around the clock: 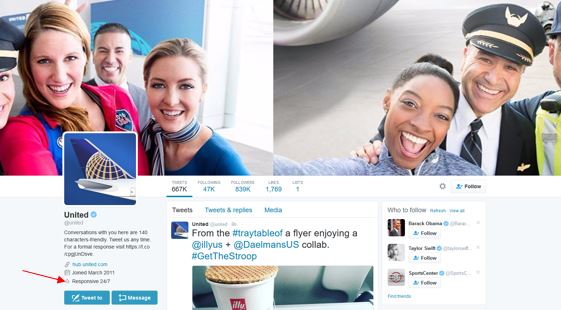 In an industry plagued by vocal customers (what’s more frustrating than a delayed flight?), the fact that airlines are pro-actively conveying “We’re here, we’re listening, we want to listed, around the clock” says a lot about otherwise “traditional” brands and the shift occurring in the social sphere.

The always-progressive Hotels.com also already has their responsive settings integrated, too: 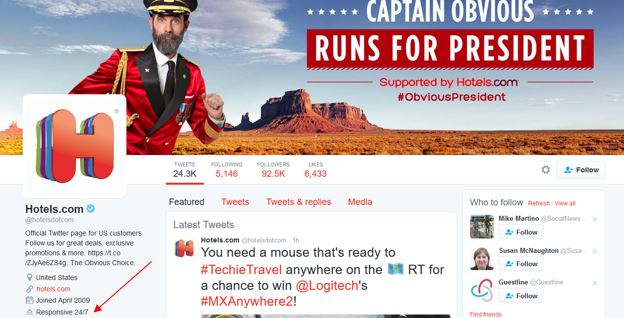 Although this ‘responsive indicator’ feature is new, Twitter has been pro-actively inching toward being a customer service leader for some time.

When developing your strategy, Twitter emphasizes the importance of distinguishing three different stages of customer service that can be delivered on the platform:

As an example, airline-related tweets are remarkably common to come across: 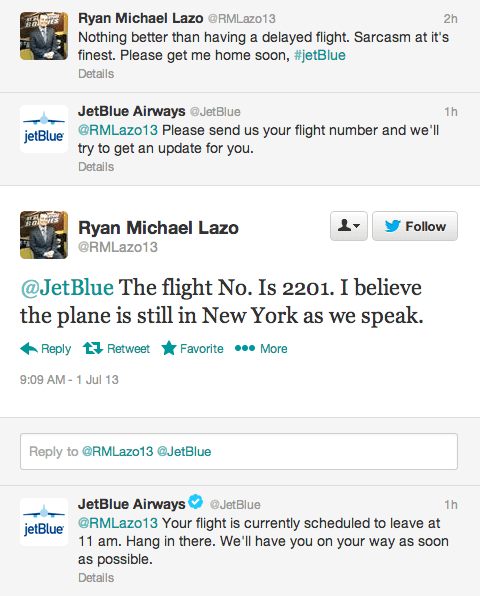 In the above example, JetBlue nicely displays an example of the process outlined in steps 1-3 of Twitter’s customer service strategy.

First, a customer aired a grievance regarding his delayed flight. JetBlue then responded in a timely manner to obtain more information, then ultimately provide an update.

Although Ryan’s flight was still delayed, the level of responsiveness and personalization shown by JetBlue undoubtedly altered his negative mindset in that moment, even if only slightly.

@JetBlue is a pristine example of a travel brand that combines friendly customer service with fun travel content, such as its #FlyingItForward initiative to provide fliers with tickets to spread goodwill.

It’s inspiring that Twitter is taking steps to make the process more seamless for travel brands to connect with consumers and vice versa.

This post was originally written for Maximize Social Business.