Cruise lines have been able to tap into social media in unique ways. In addition to active presences on Twitter and Facebook, they’re also bringing people together by hosting events tailored to the social-savvy crowd.

Like traditional (land) tweetups (networking events providing the opportunity for those who’ve met online to meet in real life), October’s #SEATweetup is fast approaching and offers average joes the opportunity to network with some of the finest social media marketers. 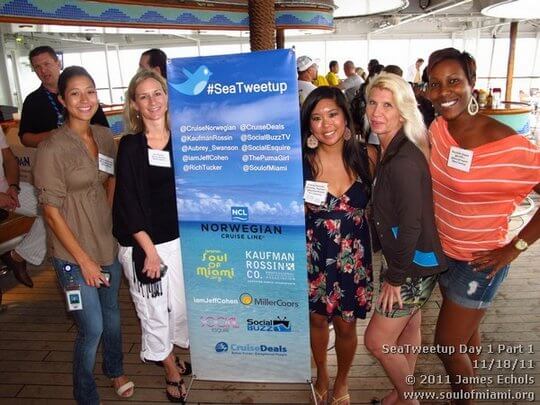 One of the event’s sponsors is CruiseDeals. CruiseDeals has been setting a steller example of branding on social media, and because of their pro-activity, they’ve been able to acquire strategic partnerships; help raise money for charities; and be featured in various legitimate publications.

The cruise line was the first travel agency active on Twitter in 2008. Despite Twitter being a new platform, CruiseDeals hosted a Twitter-based giveaway, providing a cruise to a lucky Twitter fan.

In 2010, they planned and promoted the Cruise4Haiti on Twitter to raise money and transport donations to Haiti, in partnership @Kidtravel and @CruiseBuzz.

Due to their pro-active and philanthropic presence, @CruiseDeals was invited to be part of the Twitter beta program for promoted tweets.

In 2011, they teamed up Green Mountain Coffee and VaynerMedia to launch their brew-over-ice product by giving away an Alaska Cruise promoted on Facebook and Twitter.

Thanks to this sweepstakes, their Facebook fan count increased by 50,000 (yes, fifty thousand!)

They also joined forces with Norwegian Cruise Line and members of the South Florida social media community to host the first #SeaTweetup.

The company has thoroughly embraced the social media community by attending and promoting social media conferences, events, and Tweetups, and also acquired a sizable audience that is kept engaged with cruise giveaways and the best cruise deal alerts on the internet.

Thanks to their Cruise Price analysis on CruiseSource and deal alerts on Twitter, @CruiseDeals was recommended by Money Magazine, NY Times, ABCNews.com and Travel & Leisure.

And, thanks to social media and blogging, CruiseDeals.com has been been featured in many major publications like Wall Street Journal, USA Today, Forbes, along with the ones mentioned above.

Having been passionate about social media since 2008, CruiseDeals has been an integrated part of the community of social media evangelists. Their audience is engaged with original high-quality content that displays their expertise by alerting clients the best cruise deals, which also helped gain a lot of earned media. They participate in social good projects whenever possible. Meeting other social media marketers face-to-face and teaming up on cool projects, along with the willingness to experiment, has been keys to their success.