As we continue through our economic recovery, many holiday parties, whether they be neighborhood gatherings, family get-togethers or office celebrations, are still falling by the wayside with the cost of catering being so high.

To ensure that the holiday spirit remains intact, Stonefire Grill is launching its second annual Facebook contest seeking the most deserving company, family or neighborhood, the winners of which will receive a fully catered party for up to 100 guests.

Those interested are encouraged to visit Stonefire Grill’s Facebook page no later than Friday, November 30 and simply state why they deserve the free party.

Multiple winners, who will be selected based on how compelling their stories are, will be announced on Facebook on Thursday, December 6.

Stonefire Grill has earned national attention for its value-oriented catering.

The entire menu of American fare (i.e., Mesquite BBQ Tri Tip, BBQ and Lemon Garlic Chicken Breast, Baby Back Ribs, and a wide assortment of salads, pizzas and pastas) is available via its catering operation.

Packages start at just $7.99 per person and include a choice of entrees, salads, sides and pastas. Plates, utensils and napkins are included. 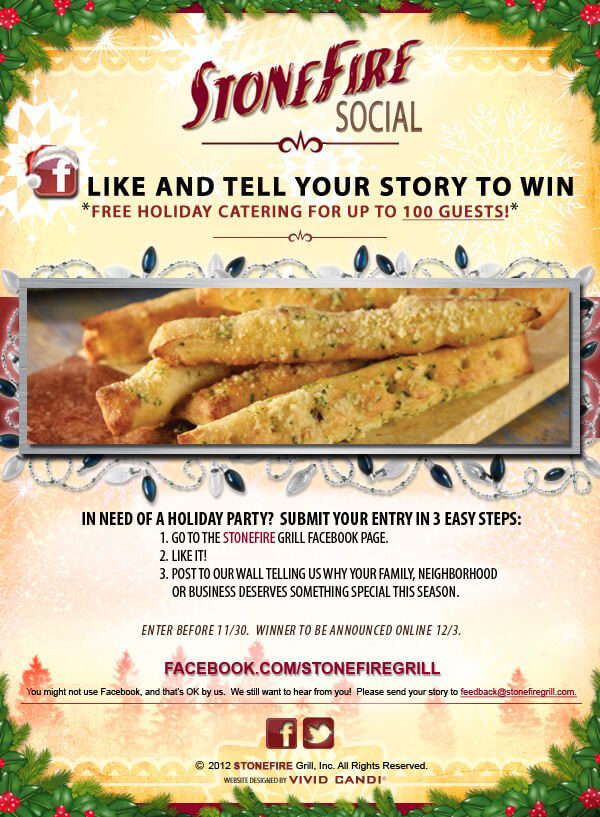