In one of the most buzzed about blogger contests to-date, Pei Wei Asian Diner recently sought someone to “Blog Asia” – an individual to travel for 18 days across Pei Wei’s five Asian countries eating everything from street food to five-star cuisine while recording the whole experience.

Pei Wei Asian Diner, owned by P.F. Chang’s China Bistro, offers cuisine influenced by the cultures of China, Japan, Korea, Vietnam and Thailand. When you google “Pei Wei,” the first description that comes up under the website’s link is “Pei Wei is a place just outside of your usual routine where you can experience the vibrant flavors of dishes inspired from five Asian cultures.”

Indeed, outside of the usual routine they are.

Pei Wei’s Vice President of Marketing, Terry Haley, has more than ten years of marketing, brand management and business experience and is responsible for the marketing and communications across 168 Pei Wei Asian Diner restaurants in 22 states.

I sat down with Terry to learn about the thought processes that went into the blogger promotion as well as their overall social marketing strategies. I was caught off-guard by how young and mellow he is, but, most noteworthy about him was how honestly and effortlessly he conveyed information, providing hugely valuable insight and sound advice for restaurants (or any businesses) looking to proceed in the social media world.

A key objective to Pei Wei’s engagement with consumers is what Terry refers to as “flavor tourism” – an affinity for trying and learning about the five cultures of their menu.

The blogger search came about spur-of-the-moment when Chef Eric Justice mentioned he was going to Asia, and they thought it might be fun to find someone with a shared passion for flavor tourism to record the trip. The idea was not initially briefed as part of their social media agenda, but rather as a way to produce content that’s not directly from them. They simply wanted to find those who could relate to an idea that they participate in (flavor tourism), and the whole process organically took off from there. 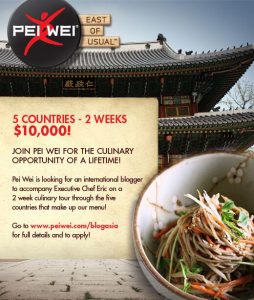 Narrowing down the entrants was extremely difficult due to the quality of the participants and the passion they all exuded. While only one was chosen to travel to Asia (congrats to Alice!), Pei Wei opted to keep its four other finalists as a part of their first-ever blogger network: a network all about exploring new cultures through food. They won’t just talk about Pei Wei’s dishes, but instead focus on this shared idea of experiencing different flavors. Through these people, the hope is to vastly broaden the passion for flavor tourism.

In terms of their start in social media, Terry emphasized that structure was hugely important before they took off; he’s not a believer in doing something just to do it. The marketing team spent a lot of time assessing which channels would be most productive for their objectives, and they proceeded very methodically. Once an overall social media plan was in place, they went through and assessed how each outlet – Twitter, Facebook, Flickr, etc. – would be immersed in the process. They started by just looking around and analyzing how competitors were using each channel.

As they got going, they contemplated how to up their game by building specific content for each portal. One of the first promotions they did on Facebook was a “Redeeming Ramen” initiative wherein those that participated got a coupon for ramen (Pei Wei ramen; not imitation top ramen!)

“People in each portal have different wants, needs and uses for information,” Terry noted, “we just felt our way through it.”

He also pointed out that “you can’t monetize learning incites you can derive from people. Social media is a way to share into consumers in a way they want to receive information.” Businesses don’t need depend as much on big, expensive things anymore. The human cost involved in certain programs is high, but it’s worth it. Blog Asia got huge buzz and PR, and the actual monetary cost to run it was relatively low. Pei Wei learned straight from consumers what they wanted the blogger to talk about, and so Pei Wei will be able to better appease their audience as a result.

Education amongst internal staff should also be of high priority. For example, Pei Wei hasn’t tried any Foursquare specials yet, but if/when they do, they’ll make sure that all Pei Wei employees are fully aware of the special and all the technicalities surrounding it.

It’s also important for staff to know how to craft response statements. Unlike traditional PR where you have a schedule and know when something’s going to happen, there’s little time to prepare when someone posts something online. The second they do, it’s live, and you need to address it promptly. Sometimes, if it’s a smaller matter, your community will take care of it for you. 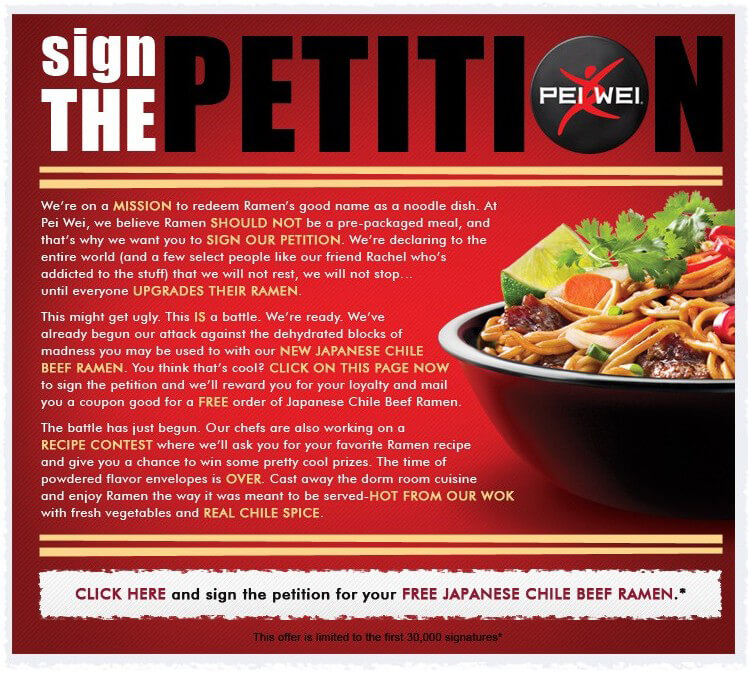 Other times, you need to address it. If you do screw up, Terry says “be honest, straightforward, and say ‘we screwed up’!” Pei Wei did a 10th anniversary offer that got forwarded amongst infinitely many people between email, Twitter and Facebook. The demand ended up exceeding the supply, and the system broke for a day. Many of the marketing staff, including Terry, went on personal accounts talking to customers during all hours of the night explaining the situation and apologizing, then eventually sent a mass letter on behalf of the marketing team addressing the mishap.

Learning from others’ mistakes is hugely important. After witnessing a Facebook controversy surrounding another brand, Terry got on the phone and told his team he wanted a decision matrix in place. They discussed how they’d handle certain customer service issues so that if something happened, they’d be ready. They even had a plan in place for Blog Asia in case people responded adversely.

Terry’s basic advice for restaurants new to social media or not yet involved includes:

Best Practices for Data-Driven Marketing
Interactive Content: What Is It and How to Master It
How To Turn Negative Social Media Comments Into Positive Marketing
Leveraging Storytelling to Boost Marketing Success
How to Find the Most Success on Instagram
Tags: asian,competitors,customer service,dining,flavor,network,promotion,tourism