An Online Taste of Venezuela

Earlier this month, I attended the inaugural Social Media Breakfast for the city of Los Angeles. It was held at Coupa Café, a cute restaurant in Beverly Hills with a truly authentic vibe. 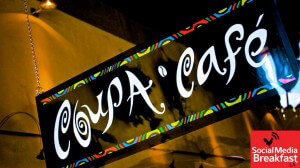 It combines the best of Venezuelan dishes with the philosophy of the modern slow food movement promoting the use of organic and fair trade ingredients. It’s a family-owned business that was conceived by the Coupal family’s desire to revive the tradition of the excellent quality of Venezuelan coffee that was lost during the “oil boom years.”

They opened their doors in Palo Alto, California in 2004, followed by the Beverly Hills location two years later. They also opened a location on the Stanford University campus in 2008 along with a second one in 2010.

A flattering testament to the restaurant is that, in the film The Social Network, the filmmakers were specific enough to feature Mark Zuckerberg’s character drinking from a Coupa Café mug, emphasizing how brand-oriented social media is.

Camelia started a Facebook page for the Beverly Hills location right when it opened, and just winged it, learning primarily from other restaurants that were using similar initiatives.

One of the major ongoing social media promos they do is “whisper words” where they’d post a word on Twitter and/or Facebook, and if a guest comes in and says the word, they receive a free coffee or hot chocolate (depending on each specific promotion). This is a great idea as it’s totally trackable and is well received by consumers – at times there are 100 people or more claiming whisper words per day. 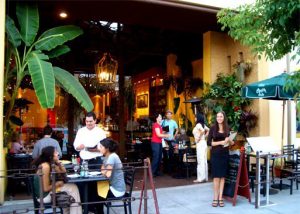 Though they tried print advertising in the past, they don’t feel as though it’s as effective as online for the Beverly Hills location. In this light, they now do all their promoting online, and primarily though Facebook ads. They also recently have been doing more Facebook promotions where if guests check in, they receive a free appetizer. This too is trackable, and it also creates online feedback. Plus, as each person checks in on Facebook, he’s thereby exposing the restaurant to his friends.

“Social media is the way to get everything known nowadays,” Camelia noted.

She finds Facebook easier than Twitter since there’s more than can be done there: pictures, events, plus it’s more interactive. Because Coupa is a family-owned business rather than a restaurant chain, the Coupals work together as a family; it’s their idea, menu food, way of working, so they have a lot of flexibility in terms of what they can do. This is awesome in that they are truly representing their brand and providing a wholly unique perspective.