The OC Fair & Event Center is a multi-functional venue that “provides educational, entertainment and recreational opportunities for the general public and preserves the heritage of California agriculture.” It’s home to the Orange County Marketplace, Pacific Amphitheatre, Centennial Farm, the OC Fair and other ongoing events hosted throughout the year. This past year, they debuted their first self-initiated New Year’s Eve Block Party, which was very successful, along with Food Truck Fare Thursdays, which attracts a large crowd on a weekly basis. 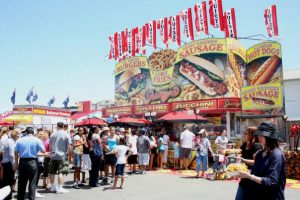 The 2010 OC Fair was recently awarded several top placements in the Western Fairs Association (WFA) annual Achievement Awards, which recognizes excellence in the fair industry and provides a forum for fairs to share successful ideas and programs. They received first-place rankings in fair logo and best new idea (misting stations) as well as second-place rankings in several categories, including social media campaign.

Robin Wachner, the fair’s Director of Communications, has run their social media since its inception. She was using Facebook personally and saw how much information was being shared, and how people came together. A PR veteran, she noticed the subtle changes in the industry and that social media was becoming the new primary way to communicate with both the media and the public. 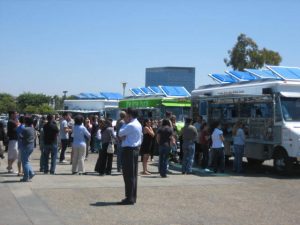 The social media fanbase was grown entirely organically. Robin began to notice how, the more interesting content she posted, the more people came, and the more they interacted. It was a natural transition for people to begin using social media personally to locate information on places they like, so it became natural for the fairgrounds to take advantage of that opportunity to be present. It’s also a very cost-effective way to promote.

Food Truck Fare Thursdays, for example, draws 300 people to the fairgrounds each Thursday. Featuring a rotating variety of food trucks, this weekly event helps garner buzz about the fairgrounds as well as local food trucks, offering consumers a chance to sample different trucks. It is and always has been relayed entirely through social media.

They’ve kept their Twitter and Facebook pages enticing by doing a lot of different contests including trivia questions and word scrambles. When they have tickets they want to give away, they’re able to build up a lot of buzz and excitement online. At times when the fair is quieter, they offered exclusive online coupons for guests to print out.

They’ve also used social media as a way to solicit feedback on many things. They asked their consumers directly what kinds of concerts they’d like to see in the future. Another fascinating find was that they brought in focus groups to get opinions on the NYE Block Party in addition to asking their Facebook fans the same questions. The results of both groups was virtually the same, posing a question about whether or not focus groups (which cost money) will eventually become obsolete when the same kinds of consumer response is available for free through Twitter and Facebook. Last year was also the first year they used Yelp and found it an effective tool in addressing customers and their concerns. This year, they hope to beef up their Yelp and Foursquare promotions, including incentives for mayors as well as possibly, an OC Fair badge.

The theme for this summer’s 2011 OC Fair is “Let’s Eat” as a result of surveys indicated people are most crazy about food, followed by music. There’s going to be several new, authentic features at the fair this year including the presence of food trucks and possibly, a food-truck throwdown, pinning all the regular fried, fair-food favorites up against food truck cuisine.

Robin’s advice for any similar venues looking to get started with social media include initially building up your fanbase by following other fairs, amusement parks and any other similar venues and those that are talking about them, along with relevant pages pertaining to your city.

Covid-19 + Restaurants: How Mobile Chatbots Can Help
6 Tips on How to Recover from a Social Media Disaster
7 Content Marketing Trends To Look Out For in 2022
3 Ways To Manage Engagement On Social Media
How to Increase Conversion Rates with Influencer Marketing
Tags: Block Party,Contest,Events,Facebook,Fair,feedback,food trucks,Let's Eat,OC,Twitter