What We Can Learn From #Timeto365

Microsoft debuted its latest version of Office today, along with its “Time to 365” campaign.

By visiting office.com/timeto365, users can leave tips for others with feedback on different ways to use the various components of the new offerings.

The #Timeto365 hashtag is also being promoted on Twitter, allowing conversation about Office 2013’s launch to be streamlined, and for people to follow along and learn more about the launch party that took place this evening in NYC.

The platform is now offering a subscription model, which allows for easy access of your items on a mobile device as well as the ability to launch and sustain a business website; create, store, and edit docs online; and connect immediately with colleagues on projects. Learn more here.

Despite these new features, the reason I decided to write about Office is because of their social media presence.

Earlier, I tweeted the Forbes article talking about some of the benefits of the #Timeto365 subscription. I often share articles simply because I find the information valuable, and not because I necessarily anticipate a response.

I was baffled to find that less than an hour after I tweeted, the @Office Twitter account had responded. 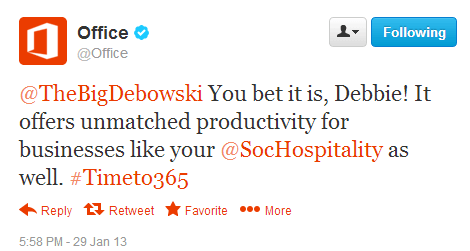 I hadn’t tagged their handle; only used the hashtag. To take things a step further, in their tweet back, they referred to me by name and referred to my blog, displaying that they’d clearly read my Twitter bio. This kind of personal touch they displayed is extremely rare among the rapid pace of Twitter.

Furthermore, as they’re undoubtedly receiving a high volume of tweets today, the fact that they’re monitoring their brand and the hashtag this intently, and responding personally to tweets, is quite impressive.

I responded letting them know I’d check it out, as, while I may have eventually upgraded before, I had a greater desire to do so now after this more intimate exchange. To that, they responded again:

These kind of responses, seemingly rare among brands, further displayed their humanization and superior customer service. Taking the time to say thanks for supporting, along with the explicit offer to reach out for help, is incredibly refreshing to hear as a consumer.

Additionally, upon checking out their Twitter stream, it was evident they were treating others the same way. They refer to nearly everyone by first name, and often include something personal in each response.

Rather than use today to just push their product, they jumped on the opportunity to reach out to their consumers and create personal, memorable connections.

Best Practices for Data-Driven Marketing
Interactive Content: What Is It and How to Master It
How To Turn Negative Social Media Comments Into Positive Marketing
Leveraging Storytelling to Boost Marketing Success
How to Find the Most Success on Instagram
Tags: customer service,Twitter