An Inside Look at Snapchat Marketing for Hotels

Having emerged among a now social-savvy audience that is now familiar with and immersed in social media, Snapchat’s growth has been ahead of where other social networks like Facebook, Twitter, and Instagram were when they were four years new.

Although many still consider Snapchat an app for teenage sexting, its evolution has shown that marketers would be remiss not to consider it.

Millennials are leaning toward Snapchat as their social platform of choice, making it the perfect outlet for brands looking to reach this particular audience.

Taco Bell was one of the first brands to utilize Snapchat effectively to their target audience of Millennials.

According to Fortune, Snapchat has become a powerful force in mobile video with the app’s video views having more than tripled in the past six months.

With the service now getting six billion views each day, it is critical to assess whether Snapchat would be worthwhile to pursue as a video marketing tool.

Hotels are always looking for unique ways to position themselves to today’s customers, and numerous hotels have recognized the value of Snapchat-based campaigns.

Here’s a look at how two major hotel brands, Marriott and Starwood, approached using the platform, as well as some recommendations for how hotels can take their Snapchat marketing to the next level:

In an attempt to reach the younger user, Marriott launched its Marriott Global Content Studio to produce content from TV shows to GIFs in an effort to get Marriott’s 18 brands at the forefront of millennial travelers’ minds.

In conjunction, they chose four influencers for a three-month campaign headquartered on Snapchat. The campaign sought to facilitate a two-way conversation with users about what cities the influencers want to visit while working with the Marriott brand during the visits.

The influencers gave users a list of cities from which to choose while working with Marriott to pick cities when popular ones emerged.

Skift covered the story and attained a quote from David Beebe, a spokesperson for Marriott’s creative content marketing:

“The majority of brands are using Snapchat to push out ads, we’re actually partnering with influencers to co-create content. Our overall strategy is first content, then community, and both of those lead to commerce.”

Leaning on the millennial segment’s tendency to edit photos, W Hotels presented Snapchat with tongue-in-cheek versions of traditional postcards. For example, “wish you were here” became “You Wish You Were Here.”

W Hotels worked together with Snapchat’s creative team to develop the final filters including “Current Situation” and “Auto Reply: 000.”

All filters feature the W Hotel logo, and all filters are available to all Snapchat users, whether they are staying at W property or simply grabbing a drink at one. 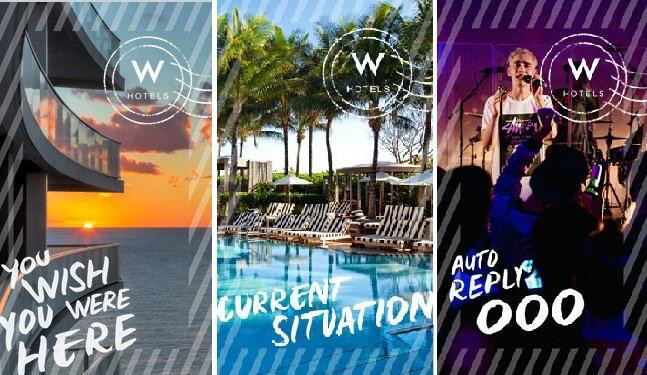 This is an excellent way for more hotel brands to build awareness using Snapchat. Aligning the brand with young, hip, upscale brands, and being one of a handful of companies that created their own filters is a victory.

Hotels host a lot of events on a regular basis. Piggybacking on the latest news of Snapchat becoming a key source for video marketing, it would be great for hotels to provide an authentic view of what is happening at popular events.

For example, the NBA has used Snapchat at a variety of events. The NBA launched their presence on Snapchat at the 2014 All-Star Game, and fans were able to watch videos from LA Clippers’ Chris Paul in addition to close-up snaps of the Slam Dunk Contest.

Tip: Hold a Contest on Snapchat

GrubHub, a food-delivery app, often gets creative on social media. When looking to hire a new intern, they turned to Snapchat to test their candidates’ “Snapchat skillz.” 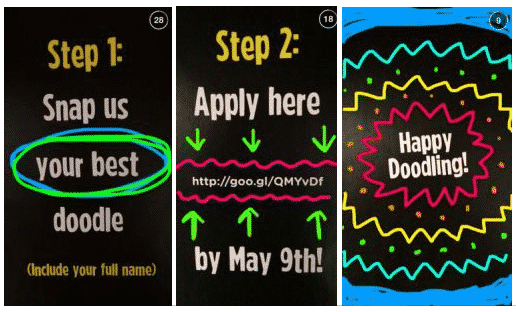 Another popular campaign they launched was a #SnapHunt where they ask users to follow them on Snapchat and respond to the new challenge each morning.

Ten winners received $50 in free grub each day, and many of the submissions were featured on GrubHub’s blog.

These are excellent examples of contests hotels could employ. Since a hotel has so many elements (guest rooms, meeting space, restaurant and dining options, spa, recreation, etc.), there are numerous ways they can tailor challenges toward specific need periods.

This means there are a variety of incentives at their disposal to offer as rewards for Snapchat contests.

Have you followed any other hotels on Snapchat? What strategies are they optimizing?

Covid-19 + Restaurants: How Mobile Chatbots Can Help
6 Tips on How to Recover from a Social Media Disaster
7 Content Marketing Trends To Look Out For in 2022
3 Ways To Manage Engagement On Social Media
How to Increase Conversion Rates with Influencer Marketing
Tags: snapchat,snapchat marketing