How to Keep Negative Reviews from Becoming a PR Nightmare

Despite your best efforts to please all of the people all of the time, instances arise where that isn’t the case.

These can prompt the posting of a long, nasty and perhaps even unfair online review. It may well-written, it’s on a prominent social site and you’re 99% sure it’s going to influence would-be customers.

How do you deal with this kind of blow to your reputation?

Well, the first thing to remember businesses are run by people. Even with as much as experience as you may have, you’re only human.

And sooner or later, you have to deal with confrontation and figure out how to handle a negative situation.

When push comes to shove, here are five helpful tips for transforming a painful negative into a positive one for your business:

First of all, any sign of negativity on your part will only have a negative impact on those reading it.

The moment you put your defenses up, it’s obvious you’re doing so because you know you’re in the wrong.

It’s an error that’s never been better-illustrated than in the case of the now-infamous Amy’s Baking Company.

How did the brand’s boss respond to customer criticism?

Which is precisely why the ‘kill them with kindness’ rule is one to live by in such instances.

Think about the kind of offer that they’ll absolutely be unable to refuse, at least in the instance that their complaint is true and just.

Apologize for their dissatisfaction and request that they call YOU directly to arrange something compensatory.

In doing so, you not only show willingness to listen, but absolute commitment to righting wrongs.

If a nasty complaint about your hotel hits TripAdvisor or any popular social channel, it will be the first and highest-impact comment readers will see.

Once it falls a few spots, its influence plummets accordingly. But at the same time, so does your opportunity to turn a thumbs-down the other way up.

Promptness is of paramount importance and is precisely why most larger brands hire full-time reputation management teams, or at least utilize the appropriate software systems. 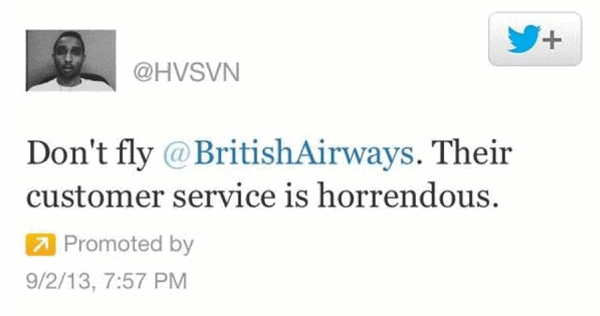 Hassan Syed made his thoughts abundantly clear after BA lost his father’s suitcase in transit. So how did the airline respond? 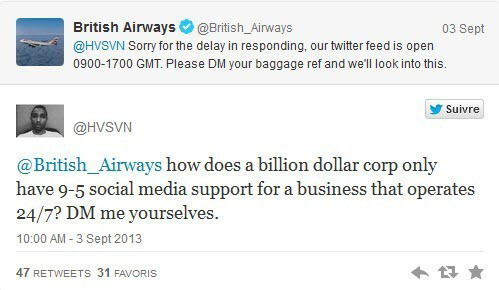 They didn’t. At least not for eight hours, by which time the original Tweet had been viewed more than 76,000 times.

The real beauty of getting right in there as early as possible with your response is that it shows how dedicated you are to customer satisfaction; constantly monitoring the airwaves and listening to the chatter.

It shows that negative experiences are not something you’ll tolerate and nor will you allow problems to go unresolved or drag on.

How you respond matters, but it’s of equal importance to when you respond.

Be sure to always make it clear that person writing the response is an individual in a position of authority, while at the same time providing direct contact details.

The key being to never under any circumstances make it appear as if the comments you are making close the case.

The truth is though, even the sincerest apology in the world won’t always do the trick.

It can give the impression that you’re saying “Yes we messed up, sorry, won’t happen again,” and essentially hanging up the phone.

Great customer service is all about showing how you’re keeping the conversation going and are committed to reaching an amicable resolution.

Don’t forget that while the web might be the communication method of choice for the masses, there’s nothing to stop you attempting to contact the complainer in person.

In fact, this is something you absolutely should do in all instances.

Exchanging messages via a public forum is one thing, but it simply makes sense to get things resolved as quickly as possible.

Should it all go to plan, there’s no harm in asking them politely to a) request that the comment be removed or b) post their own comment to confirm the matter was resolved favorably.

If it doesn’t, at least you tried.

Last but not least, it’s important to be very cautious when it comes to the fine line between empathy and acceptance.

Stray unwittingly into acceptance and whatever it is you’re being accused of, you’re telling the world it’s correct and you’re guilty.

Which makes it a tricky balancing act, given the fact that outright denial is also not always a good way to go.

The key lies in empathizing with the ‘plight’ of the disgruntled party, so much as to show that you’re unhappy that they’re unhappy and would like to do something about it.

You express interest, you give them every opportunity to reach an amicable resolution and you effectively leave the ball in their court.

And if all else fails, you could always return to point number-four and have a second stab at getting in touch with them directly!

How to Use Social Media to Manage Your Online Presence
Why Customer Relationships Are Key to a Strong Brand Reputation
The ROI of Leveraging Corporate Social Responsibility
Covid-19 + Restaurants: How Mobile Chatbots Can Help
How to Increase Conversion Rates with Influencer Marketing