Some Good Karma(geddon) for JetBlue

Southern California was abuzz this past weekend about “Carmageddon,” the traffic gridlock anticipated as a result of the closure of a 10-mile portion of the 405 freeway.

As a result, JetBlue Airlines decided to offer $4 flights from Long Beach to Burbank and vice versa on Saturday. Each airport offered an afternoon and an evening flight. Dubbed #Overthe405, the short flights provided an unprecedented opportunity for people to bypass the potential traffic jams while having an authentic flying experience without all the hassle (packing, checking luggage, etc.) and cost.

My friend Ted Nguyen and I decided to take advantage of this deal and fly up to Burbank for the day. 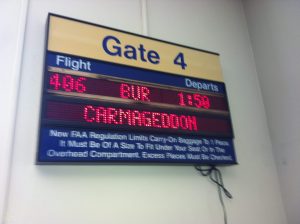 JetBlue provided fantastic customer service throughout the entire experience. The terminal was replete with a buffet of food and a 405-themed decor and desserts. The vibe overall, on both flights and around everyone flying, was extremely fun and upbeat. JetBlue also provided “goody bags” on every seat which contained snacks and a 405-decorated treat. 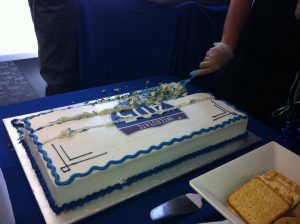 Upon the initial take-off, the pilot announced “woo hoo!” and was cracking jokes throughout the flight. We would barely reach our cruising altitude of 5,000 feet just before preparing for descent. While the flights lasted about 15 minutes, it was definitely very cool to watch LA from a birds-eye view. We got to see the bare 405 as well as many other SoCal cities. 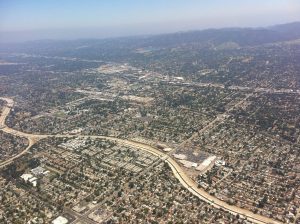 The promotion seemed to attract every kind of traveler, from solo, to couples, to families, to groups of friends seeking a unique day outing.

I sat next to a family on my first flight that had just arrived in Long Beach from Burbank, and had stayed on the plane to turn right back around and head back. I talked with the dad as his young son peered wide-eyed out the window. He said that his son loves to fly, so when they heard about this offer, they figured it was cheaper than anything they’d have done as a family in LA. Ted and I also chatted with another family who decided to take their two sons out so as to prep for their longer flight to Hawaii next month; an older couple with a wife afraid of flying; a 20-something-year old guy on his first flight ever; and more.

While JetBlue obviously didn’t profit economically from this venture, the publicity they received from it has been huge. Ted interviewed their Regional Marketing Manager, Jace Hieda, about the motivation behind the promotion:

Jace notes that the plane would’ve been sitting in Burbank anyway, so they thought, “why not fly it?” There was a lot of collaboration amongst the JetBlue teams to bring this idea to fruition. It surpassed all expectations and all flights sold out in 3 hours. They’re very active on Twitter and Facebook and really enjoy their online community.

This is a great case study of a brand measuring ROI in terms of positive PR and customer service rather than dollars.