Pinterest is one of the platforms to watch in 2012. It lets you organize things you find on the web — users create pinboards and “pin” items on their corresponding boards. For example, “Recipes,” “Style,” Home Decor” and others are typical topics of pinboards, allowing people to delegate content [images] of each category to each specific board.

Then, you’re able to follow friends and other users to keep track of their pins, and re-pin to your own your boards items that are relevant to your interests. 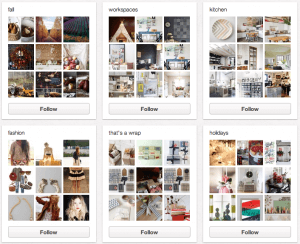 The goal is to “connect people all over the world based on shared tastes and interests.”

Thus far, it’s been primarily used for personal interests, but, as its popularity has been on an exponential rise, it’s entirely plausible (if not likely) more and more businesses will begin utilizing it (because if that’s where your audience is hanging out, you should be, too)!

A recent TechCrunch article entitled, The Rise Of Pinterest And The Shift From Search To Discovery, notes:

Pinterest is growing for a variety of reasons. It enables users to clip things they like. It emphasize pictures over text, which are more visually appealing and easier to digest. Signing up is easy. Pinterest has crafted a fun, whimsical, artistic image. In particular, it has struck a chord with female users, an attractive demographic. Pinterest has added to the lexicon of “like” or “retweeting” or “reblogging” or “upvoting” with the ability to “pin” content and then “repin” it across the site and other networks.

There could be decent potential for the hospitality industry.

For example, restaurants can create pinboards of various pertinent categories (food, cocktails, meeting rooms, etc.), similar to the way they might with Facebook albums. Granted, it’ll be time consuming, but again, if potential customers are hanging out here that may not already know of you/follow on Facebook, it could be an opportunity to stimulate new business.

Destinations can share A LOT by creating boards for the numerous components of their cities. Hotels. Dining. Shopping. Attractions. Again, new audience. And once people start seeing these images and pinning them, then those folks’ friends start re-pinning, etc., etc., the potential for virality enhances quickly and you’ve reached a whole new segment.

While it may seem time-consuming to jump into another platform, keep in mind the time commitment would be moderate compared to other options. Like TechCrunch said, much of Pinterest’s appeal resides in the fact it’s strictly images. All you’d need to do as a marketer is upload images. There’s not as much brainstorming and strategizing that has to go to into it, as does other tactics.

Will you be testing out Pinterest for business purposes?