The Acai berry market‘s fast growth has a lot to do with social media. Have you seen the rate at which people post photos of their vibrant purple smoothie bowls? Acai’s reputation as a superfood also enhances this trend. But how did once little-known Acai berry start gaining popularity?

These factors and more launched acai berries into the limelight.

What exactly is Acai berry and for what is it used?

The Acai berry is a round fruit that grows on the Acai palm tree. This super fruit is native to South and Central America regions and grows naturally in the Amazon rainforest. The fruit boasts dark purple skin and yellow flesh that surrounds a large seed.

The Acai is commonly served as an Acai Smoothie Bowl. The smoothie bowl is often topped with cut fruit or granola. Acai is also in beauty products. The Acai berry is incredibly rich in antioxidants, surpassing other antioxidant-rich fruits like cranberries and blueberries. Acai berry is also used to help lower bad cholesterol, improve brain function and hydrate the skin.

When did Acai berry start to gain popularity?

Tribes of the amazon rainforest used Acai berries to treat various ailments for thousands of years. However, this Brazilian native fruit debuted in Western countries in the early 1990s. After its introduction, modern Brazilians used it to regain energy after swimming at the beach. People in the western world then discovered its health benefits and started to pulp and freeze it to keep it fresh for a long time. It also became a natural additive in smoothies and later found its way into people’s diets.

However, the popularity of Acai berry skyrocketed in the early 2000s. This is when social media platforms emerged. Smartphone also began to flood the market. The benefits of the Acai berry spread widely through medial social platforms. Celebrities like Oprah also endorsed Acai and referred to it as a “superfruit.” As a result, more and more people gained interest.

Instagram launched in October 2010. It is now the fastest-growing and one of the largest social media platforms in the world. Instagram now has over 1 billion users, with 500 people using this platform daily.

Instagram played a crucial role in accelerating Acai berry growth. Food is a vital area of focus on Instagram, and Acai berry is a sought-after food. The use of features such as hashtags, live videos and stories helped spread the health benefits of Acai berries to millions of people across the world. For instance, the hashtag #acaibowl has over 1.39 million posts on Instagram.

An influencer is a person who has the power to influence the purchasing decision of his/her followers because of his/her position, authority, knowledge or relationship with his/her audience. Influencers have a massive following in specific niches, and they engage with their audience actively. The number of influencers promoting healthy eating on social media platforms has increased significantly over the last decade. Influencers are widely trusted by their audience. Their followers often copy the food they eat and the clothes that they wear.

When influencers post their food habits on social media, their followers pay attention. They’re able to educate followers on the benefits of this fruit. Also, the bright purple colors of an Acai Bowl pop when you scroll through your feed.

How restaurants and cafes respond

Due to the high popularity of Acai bowls, many restaurants in the USA, UK, and Australia incorporate Acai as an ingredient in foods on their menu to capitalize on the ready market. Many add their own spin to Acai bowl recipes to make the meals unique and appealing.

Being able to spot the next food trend before your competitors can provide a competitive edge. Use social media to conduct research. Pay particular attention to popular celebrity accounts to see what foods they tweet about.

Another way to research food trends is to use a tool like Hashtagify. 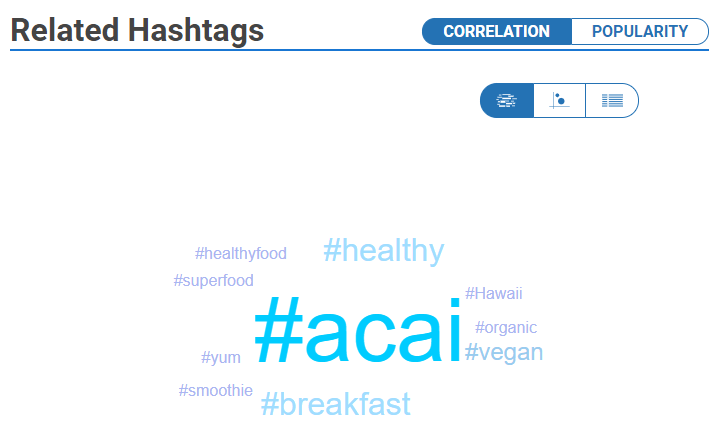 Once you have identified a new food trend, then roll it out via a special menu and your Instagram feed. You’ll be able to get feedback from your customers and to test the market!

Author Bio: Adam Bogatin was one of the pioneers of the Acai industry in Australia, founding Purple Foods in 2009 after a holiday to South America convinced him that the berry would work well with Australia’s cafe culture.