Rubio’s, the restaurant brand known for fish tacos, unique seafood dishes and a devotion to the ocean, is celebrating National Burrito Day in a big way this Friday, April 5. They are also known for being one of the most active restaurants on social media. 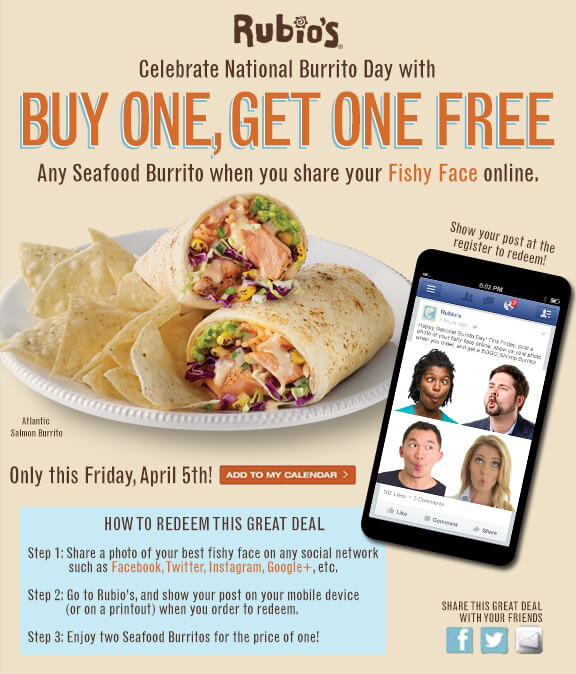 Rubio’s dedication to seafood cuisine began when Ralph Rubio and his father, Ray, opened the first Rubio’s in 1983 and started the fish taco phenomenon that spread across the nation. The time Ralph Rubio spent developing the fish taco recipe became the basis for everything Rubio’s stands for today: interesting and complex flavors in chef-crafted recipes using fresh ingredients.

I recently interviewed Ralph about their social media strategy and he emphasized the brand’s commitment to educating fans about their fresh seafood initiatives.

For more information on Rubio’s, its menu options, to find a location near you or to learn more about the National Burrito Day promo visit: http://rubios.com. Those who like to follow restaurants on social media can also join in the conversation and be among the first to hear about upcoming events and celebrations, on Facebook at http://facebook.com/rubios and Twitter at http://twitter.com/rubiostweets.

Rubio’s generously provided some ‘eat free’ cards for which we did a giveaway last week — Congrats to our winners, Pattie and Jenny!